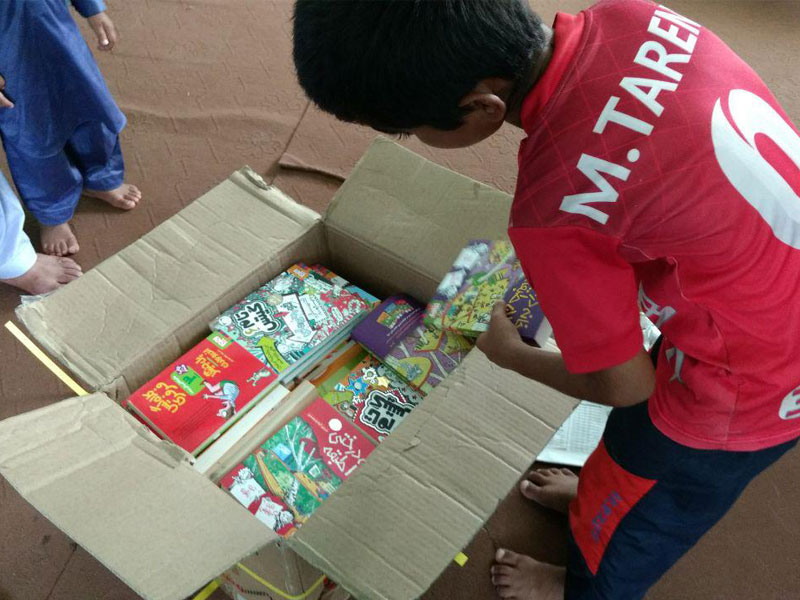 Book packages of the Summer Libraries project of Read with Me were received by school libraries and librarians of some villages in ZarAbad area.

According to Ketabak’s interview with Shirin Ahmadian, the public relations director at RWM, these packages were provided by ITPCo. (Entesharat Fanni Iran), Hoopa Publications and IRHCLI and the financial support of Fund for Education & Empowerement of Working Children to establish Little Summer Libraries for chidren.

The PR director of RWM announced that:

“After preparing these book packages, Pedram Behrouzi and Keyvan Ershadi, two of RWM’s members who volunteered in taking quality books to little Summer Libraries, delivered book packages to the villages of ZarAbad area. These books were distributed amongst 16 schools.

In some villages, teachers could not participate in the project. So instead, a number of students volunteered to fill in as librarians to lend and read books to children.

In this project, a lot of children and adolescents who have learned about children’s literature and Reading Aloud methods throughout their RWM education will assist their teachers and tutors in keeping their little Summer Libraries active in schools, mosques and even in their home throughout the summer. At the end of summer, all books will be collected and kept in the class libraries of schools so that students can read them in the upcoming academic year.

Children in this village warmly welcomed these Summer Libraries

The PR director of RWM also added about the reception of project:

“According to the volunteer members of RWM, a large group of children, adolescents and their tutors gathered around to receive their book packages. Currently, child-centered Libraries of RWM are under construction in some schools that have participated in this project. In each school, a distinct space will be allocated to these libraries which after careful planning and designing by RWM will be equipped to hold various Reading Sessions in. We deeply hope that by the financial supports of institutions and benefactors of RWM we can implement these child-centered libraries in other schools as well.”

Shirin Ahmadian rounded up her interview with ideas about establishing little Summer Libraries:

“The idea of establishing little Summer Libraries of RWM and sending book packages first came to us on May 2017 when RWM experts were visiting ZarAbad at Konarak, Sistan & Balouchestan Province to evaluate the process of project implementation throughout the year. According to our expert’s reports, children in this area didn’t have appropriate places to spend their free summer time in. Therefore, IRHCLI decided to send book packages for all age groups to this area and establish little Summer Libraries wherever possible as a response to these children’s needs and requests. This project started from the beginning of Summer 2017.

After sending the packages, student-librarians have been assigned to write a report on their activities throughout this summer.” A library space in need for equipment Read with Me Library Workshops in MahAbad and Paveh

Read with Me child-centered library in Etrat School

Ghargharuk Read with Me Library Is Now Open
0 replies